This year we have streamlined our computer clusters. The bulky 220VAC transformers from last year have been eliminated, the interconnect has been upgraded to Gigabit Ethernet, and the systems will be delivered with the Operating System and development tools pre-installed. This OS will be the Bootable Cluster CD Project's version of Debian Linux. There is extensive documentation and examples at the BCCD website at http://bccd.net/. You can also go to the Shodor Foundation's Petascale site for a complete listing and explanation of the parallel software applications included with your cluster. http://www.shodor.org/petascale/materials/modules/ 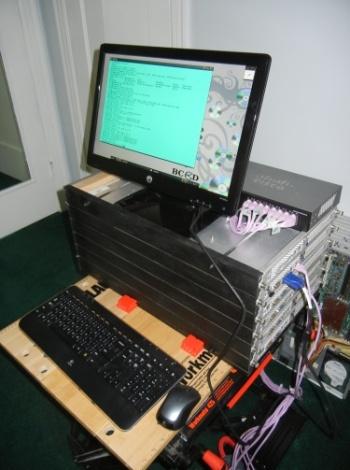 There is no fee to enter this competition, but because of limited hardware, we will only be able to provide computer clusters to twelve high school teams. Any team wishing to participate must complete a simple application on our website. The most important part of the application is the contact information for your team members and your team's adult mentor. Team mentors do not need to be conversant in computer systems, but it would be an advantage if they are!

There are two aspects to the Competition this year. The first aspect, the Software Optimization Challenge, is described in a separate document that is currently available at our website. Your team can start work on it immediately after receiving your cluster. The second aspect, the Hotseat Challenge, will be announced at the UHSSC competition at the University of Utah on March 20th. You will have 6 hours to complete this challenge. Both will be judged on which team produces the desired output in a minimum time.